Posted on February 22, 2016 by paulwoodfordmedia

Sometimes, a high profile sporting event can throw up a story that can truly inspire us on a very normal, day-to-day level.

Take for example Denny Hamlin’s victory in the Daytona 500 at the weekend. The race is the Super Bowl of the American motorsport calendar, yet behind the scenes of the closest finish the race has ever seen, is a story to which we can all relate.

Denny’s parents spent his entire childhood throwing every last penny, and every waking hour into keeping their son on a racetrack. He showed promise from a young age, and demonstrated dedication beyond his years to making it in the industry of motor racing.

This gave them belief that what they were doing would one day be worth it. They couldn’t possibly have known how right they were.

Denny was punching above his weight, and invariably without the budget he needed. But the Hamlins stuck with it, including – according to yesterday’s Premier Sports race commentator – “remortgaging property and max’ing credit cards” just to keep Denny in a race car.

One of Hamlin’s backers along the way; family friend Ron Roberts describes the racer has having real talent behind the wheel, and underneath the car in an article written for The Richmond Times.

In the article, Roberts talks of Denny being able to fix the car himself; an ability borne out of the necessity of not being able to afford a mechanic to accompany him to race weekends.

Many years of self belief got Denny through the highs and the lows of a career that at times must have looked like falling short of meeting the driver’s own goals. That, and the belief of his family.

When Denny signed to race for Joe Gibbs Racing – the team with which he would create the fairytale of this weekend’s Daytona 500 – so the story goes, he turned up one day on his parents’ driveway.

When his father greeted him, he told him the day had arrived; his parents could retire, and he handed him a set of keys to a new house that he’d bought for them to live in, and a boat for them to ‘play’ in.

Following Sunday’s race, which was strewn with drama throughout (including favourite for the win, Dale Earnhardt Jnr crashing out in the dying laps), Denny Tweeted a photo of a story he wrote, presumably when he was at school, which starts “My wish is to win the Daytona 500, If I won…I would like it to come true on Feb 17, 1998”. 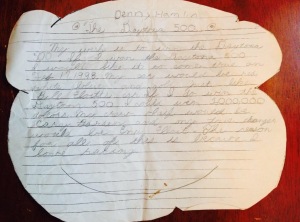 The wish may have taken longer to come true than Denny could ever have imagined, sat at school day dreaming. But then, he could hardly have imagined the nature of the moment either; coming from four cars back on the last corner of the 200 lap, 500 mile race to muscle his way – three cars abreast – to the finish line of the race just a few feet out in front, in the closest finish in the event’s history.

The race commentator denounced the possibility of any of the drivers outside of the top two making a move as the cars passed the white flag for the final lap, but it was clear one man out there had belief beyond the expectations of the commentators, the crowd, or his fellow competitors as millions of people around the world – me included – rose to our feet for the thrilling finale.

I’m a fan of NASCAR on any day, but to watch a Days of Thunder style drama unfold live in front of my eyes was without doubt one of my sporting highlight of the year so far.

Reading about the Hamlin family’s fight for success after the race, I couldn’t help but think how closely that story, and those final few corners of the race reflect my own story so far, along with the support and belief of my family.

I’m pretty sure I also have a story that I wrote at school that perhaps I, too will be able to Tweet one day to similar effect.

It doesn’t matter whether you’re a NASCAR fan or not, the message is universal: Dream big.