Home › Uncategorized › What’s the all new Skoda Fabia like?

Posted on February 28, 2015 by paulwoodfordmedia

If you’re the sort of Googler who prefers to read than to watch; if you’re on dial-up in deepest darkest Wales for example, here’s a summary of what I think of the new Skoda Fabia. 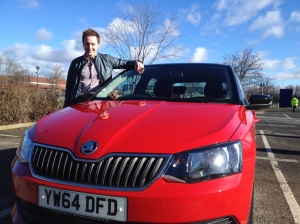 As you’ll have seen from my posts below, I reviewed the car for a film for radio station KCFM. And I’ve accompanied the film with an article. Grab a coffee and have a read…

As a self-respecting petrolhead, I can appreciate most cars in some way. There is, however a type of car I struggle to come to terms with, and that’s a shopping car. The thing is, I’ve proved you can even fit a toaster in a Lamborghini, so when a supercar can be used for white goods, why do manufacturers think it’s big or clever to make a car specifically for the job?

Putting my prejudice aside for a moment, there are shopping cars that do other things well too. Even for a hard core petrolhead. And the Skoda Fabia is one of those cars.

Fifteen years ago, the original Fabia was an overnight success, up with the best in the class for quality, and a credible challenger for a title far removed from the supermarket carpark too – the title of hot hatch.

The first generation of this car made Skoda a serious player, no more jokes; this was now a brand to aspire to, whether you were a self-respecting businessmen, a busy Mum, or a car enthusiast.

Owned by the Volkswagen Audi Group; from the outside at least, the Skoda brand was intended to represent the value end of the family, with VW doing quality, Audi taking care of premium, and SEAT slotting in as the sporty arm.

But since the introduction of the Fabia, Skoda has upset the marketing people, because the definitions are now blurred.

Skoda’s rally campaigns with the Fabia hinted at a sporting pedigree, the trim levels and equipment you get as standard on this new generation car are very executive, and if you close your eyes when you open the doors, it actually sounds like a Golf. (I did that for effect by the way – if you’ve ever shut the door of a Mk3 Golf, you’ll realise it’s a strapline with dubious foundation) 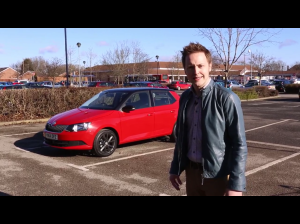 Importantly though (especially if you found this article by Googling ‘should I buy a Skoda Fabia’), with a starting price of £10,600, and standard equipment including Bluetooth, DAB and six airbags, even in the entry level ‘S’ trim, the new Fabia is still great value. A bit like that shelf full of offcuts from the meat counter in bags with yellow labels on. You know, the one that insights violence in even the meekest of pensioners. Yes, value.

Is the new Fabia well-endowed? Well, the engines range from the super economical 1 litre, 3 cylinder 59bhp entry level unit to the moderately capable 1.2 TSI producing 109 horse powers. And there’s something for everyone on top too, with Skoda’s Colour Concept System allowing personalisation of colour and trim combination.

The version I drove was the 1.2 TSI with 89bhp. Now, although this particular engine shows just how far we’ve come with engine technology, as a petrolhead I can’t deny that I’m disappointed there isn’t a VRS version of this new Fabia planned. Although I have a friend ‘at’ Skoda who has told me that I shouldn’t have to wait too long for that news to become old. He told me I could have the exclusive, but then I don’t think he wanted me to mention it, just yet.

If you’re not one of the 3% of buyers of the last car who opted for the hot hatch version (1% globally), you do benefit from the fact that Skoda had to make sure this initial anti-VRS decision didn’t affect sales. I have to be honest and tell you that they did this by giving all the models in the range a sporty edge. And they really have; I look back 15 years and even this 1.2 model is a world away from the utilitarian Fiesta Flight.

Let’s not forget; the Fabia is a car that, to be successful had to appeal to you…and to by cameraman. (Incidentally he actually drives a Fabia)

Ready for the technical bits? (switch off now if you’re only bothered about shopping – this car will more than do the job.)

The new Fabia is lower and wider, so immediately feels more stable. The steering is more reassuring than the last one, precise-ish with a nice bit of feedback. It’s confident. 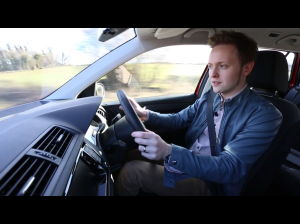 The gearbox, as you’d expect from a VW-based car feels indestructible, really nice and mechanical – it might be a car destined, on the whole for people who want reliable, dependable, simple transport, but I always like to be reminded that I’m connected to oily things. You do as well – admit it!

Likewise, it’s nice to feel the road, and while the suspension on the Fabia has been designed for comfort and practicality over performance, with impressively low road noise levels, it holds the road well enough for when you’re in the mood for a bit of fun.

The designers have been busy, too. While the car appears smaller, more sculpted and compact on the outside, it is actually bigger on the inside due to being wider, with a longer wheelbase giving more cabin space. And while we’re talking about shopping, the new Fabia has gained an extra 15 litres of boot space. It’s a four-wheeled grocery machine!

There is ample space in the boot for your shopping, it’s compact enough with good visibility for manoeuvring in those tight carpark moments, and the new Fabia will fit around the family, including any lanky teenagers.

So joking aside, if ‘fun’ isn’t a box you’ve ever ticked on the criteria for a new car, because you’ve been too preoccupied with the sensible things, there’s good news. Skoda has actually ticked the box for you – this car is capable of putting a smile on your face without you even having to think about it.

Even if that’s just the feeling of pulling up next to a Polo driver and knowing you got the better deal.

Because, actually you did.