Posted on January 8, 2015 by paulwoodfordmedia

With the future for British rallying looking brighter than ever, with the profile of the BTRDA rally series and the announcements made today by the MSA about the British Rally Championship, it seemed like an opportune moment to bring you closer to one of the UK’s brightest young stars.

Chris Ingram is someone whose career I’ve followed from his early Junior 1000 days through my work hosting the Special Stage Rally TV series. When the news broke that Ingram would be a works driver with Peugeot UK last year, those currently following in his footsteps will surely be doing so with more motivation. And I can imagine as a result there are plenty waiting in the wings.

Here’s what was on Chris’ mind when we spoke about his career, his future and his views on the bigger rallying picture…

PW: Chris, you’re the first driver to come through the new route in British rallying – from the Juniors to a works drive with top manufacturer. How much would you put your success down to the opportunity to get out and compete from a young age?

CI: The junior series is the ideal starting point for young rally drivers. The cars are very equal and it is very cheap and fun with no pressure!

Getting seat time in a rally car at the age of 14/15 is the best practice you can possibly get, especially racing against a dozen other kids in similar cars with the same power!

PW: Even rallying in the Juniors can be expensive – for anyone thinking of entering on a budget, is it a genuine level playing field, or does money still talk even at that level?

CI: There will always be cases of people with a huge budget, spending lots of money on brand new tyres and fancy suspension, that’s motorsport, you just have to get over it.

In 2011 I proved a ‘dad and lad’ team could win the junior championship. We turned up to each event without even touching the car with a spanner beforehand (because we are clueless mechanics!), and it held together perfectly.

At the end of the day the Junior cars are pretty much standard road versions aside from the suspension and safety features, so you don’t necessarily need a team of mechanics or a brand new 15 plate car to compete!

It is definitely as fair as motorsport gets.

PW: What is the biggest challenge you’ve faced during your journey to the International stage? And what did you do to overcome it?

CI: The biggest challenge was definitely going out to Europe as an 18 year old to try and take on vastly experienced drivers on their home patch.

Some drivers find it difficult to drive out of their local stages and comfort zones, but luckily I can go just as fast on rallies far from home now thanks to the experience I have in the ERC so far!

PW: At what point during your rally campaign so far did you start to think that you could actually make a career out of it – of course you had to have belief from the start, but when did it start to become a realistic aspiration?

CI: When I finished junior rallying and started the proper stages, I wanted to give myself 3/4 years working hard to chase my dream.

It was probably at the start of my 3rd year of rallying last season when I realised I could really go for a career in the sport. It was in the ERC Junior championship when I first started to show my speed against works drivers such as Jan Cerny and Stephane Lefebvre despite being a lot younger than them.

PW: Sadly, we’ve lost our two British World Rally Champions Colin McRae and Richard Burns. Do you think you, or any other current British driver could ever emulate their success and capture the imagination of the public in quite the same way?

CI: It is obvious that the sport is missing the new burns or mcrae to bring it back to the public.

Hopefully Kris Meeke can challenge VW this season as he definitely has a similar spectacular style to McRae!

It’s my dream to follow in their footsteps but at the age of 20 I’ve got a long way to go but also a lot of time in my favour!

PW: It’s a fact that despite the efforts of Special Stage and other TV series, there is a lack of rallying on mainstream television. Who is missing the trick – television channels or the various governing bodies responsible for the championships?

CI: In the UK the championships/series don’t appeal to modern audiences. I’d like to see the btrda rename the championship just to help the public understand what the hell it is!

2015 will be quite a difficult year for the British national rallying but hopefully the msa will bring back a successful BRC for 2016.

In my opinion wrc Wales and ERC circuit of Ireland are huge successes which more UK competitors need to embrace and stop hiding from top competition.

On that note the MSA need to reduce the number of smaller events to get people doing the same rallies… And ban 4 wheel drives from single venues!

PW: Let’s move on to your exciting new challenge with Peugeot – how did you find out the news about the drive, and what went through your mind?

CI: A lot of discussions happened behind the scenes between Peugeot UK, Peugeot Sport and some other influences.  I was invited to the Peugeot Citroen PSA headquarters to discuss the potential of Peugeot UK returning the sport with myself.

It all happened very quickly and within two weeks I was competing in a european championship event with a brand new official Union Jack 208 R2!

PW: These days being a motorsport star is much more than just the driving. We’ve all seen that you can drive and bring the car home for a result, but what else is it that you have to do to be in the picture for a works drive?

CI: Aside from the driving and results, I find it very important to present myself well on social media, trying to build audiences and also by being careful and saying the right things.

Being a friendly and approachable person is also very important for PR events outside of rallies.

PW: You’re into your first full season with Peugeot, having got the news during 2014. Is there a plan you’re following with the team, or is it a case of put each season together one at a time for now?

CI: We have a three year plan and we are aiming very high!

We will fight to win the Junior ERC this season, which would provide us with the perfect and logical step to the four wheel drive 208 R5 car.

PW: You’ll be sharing the iconic Peugeot name with Craig Breen in 2015, as he competes in the Peugeot Academy Team. As you’ll both be under the spotlight, which of you is under the most pressure – you because you want to prove yourself against an experienced International driver, or Craig because he’s got a new pretender to the throne?

CI: Craig is very busy with his own season and is under the Peugeot rally academy banner, whereas Peugeot UK like to have their own team.

He is in the level above at the moment driving the R5 car, so I think he has a bit of pressure to get wins now he has so much experience. However there is also some pressure for me to do the job and win the Junior championship so I can take the step from R2 to R5!!

PW: Finally, can you give one piece of advice to aspiring drivers – something realistic that they can actually work on, or keep in mind before even getting in a rally car?

CI: The best advice I could give to aspiring rally drivers is; to get as much seat time in a rally car as possible when starting, the more KMs the faster you will be!

Also, try and drive slow cars as fast as possible before jumping to the fast ones 😉

Peugeot UK rally driver Chris Ingram was talking to Paul Woodford ahead of the 2015 Autosport Show.

Don’t forget, you can join in the conversation on Twitter – follow Paul or Chris and get involved. 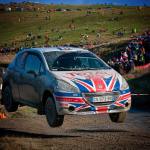 (Photos provided for publication by Chris Ingram, with thanks)