Car Films – how the story started

Posted on December 8, 2016 by paulwoodfordmedia 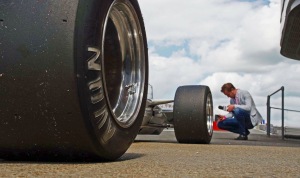 I don’t hold my first car review film up as the finest example of my work. But I do hold it up as an example of why I do what I do.

The year was 2012. I’d always wanted to present car films, and having an iconic ’80s hot hatch in the garage seemed like too good an opportunity to pass up. Of course I had no film crew or equipment, but I did have an original (!) iPhone, and a willing girlfriend.

Bear in mind that I’d never written, filmed, presented or produced anything like this before, and also that at this point I didn’t necessarily intend to share the results of my experiment publicly. That bit just sort of rolled down a hill.

Here is my very first car film; the place where this thing I do all started…

After showing a work colleague my video, I was persuaded to make it live on YouTube, and to my complete surprise it had gathered over 1000 views within an hour. I watched the view count going up, and spent some time that evening responding to the comments – talking about cars. I was hooked.

As it turned out, my family was hooked too. My wife was happy to help me film a sequel, and my five year old little boy wanted to get in on the act, having made a cameo appearance as Spider-Man in the ‘pilot’.

Suddenly, I was Spider-Man. And I was also full of ideas; rushing home from work to scribble down the next idea. I’d somehow managed to start with a low production value car review, and started to turn it into a series of funny (?) videos, with a loose motoring theme.

My family were talking about the videos, my work colleagues were asking me what I’d be filming next, and one of my friends sent me an excited message to tell me that my original 205 GTI film had gone above Jeremy Clarkson’s in the Google rankings.

With trolls comparing my style to Richard Hammond, and my jacket to a Japanese brothel (hellooo – “Drive”, anyone?), I had even started to feel like a proper YouTuber.

For number three, I got back behind the wheel…of the go kart.

I’m now 30+ cars into the series. I’ve been given Ferraris, Lamborghinis, been flown all over Europe and now have an iPhone 6 to film on. And I’m still dreaming of Top Gear.

I’m also pleased to say that it didn’t all get too much for my girlfriend. She’s now my wife and I’ve even promised to return to the grass verge where we filmed the first shot for the 205 GTI video to enjoy a glass of champagne if I ever get the Top Gear call.

To watch the whole series so far, CLICK HERE.