Home › Uncategorized › Why Clarkson was right about owning an Alfa

Why Clarkson was right about owning an Alfa

Posted on December 1, 2014 by paulwoodfordmedia

A lot is made of owning an Alfa Romeo. After all, Jeremy Clarkson once said you’re not a true petrolhead until you’ve owned one. Having owned and driven some of the best cars in the world, here’s why I think you owe it to yourself to stare at your reflection in ‘that’ badge.

Having owned everything from Mk2 Escorts to SEAT Leon FRs, and having driven everything from McLarens and Lamborghinis to Group B rally cars, my road car at the beginning of the year was a Fiesta ST…I know. It also had full ‘GT40’ stripes…I know. But here’s why; I wanted a fun, chuck-able and reasonably practical car to drive every day. I wasn’t prepared to wait for a sunny weekend to enjoy whatever classic or competition car was nestling the garage at the time, I wanted every day to be fun behind the wheel.

The Fiesta did the job, but the trouble was that to most people it wasn’t that credible. It also drank like a football hooligan thanks to the lack of a 6th gear. And as if all of those weren’t enough to make me go in search of something more sensible, the news came that my wife and I were expecting our second little boy. My mind was made up, I needed to lose the stripes and gain some back doors.

So what does an almost-30 year old motoring presenter who wants to be taken seriously but still wants to smile on the commute, happy in the knowledge that he’s halving his personal polar bear count at the same time as providing for the family, drive?

An Alfa Romeo, of course.

I’d always wanted an Alfa, but stories of unreliability, spontaneous combustion and depreciation that comes with a G-force warning had always put me off. The words “if you’re going to own an Alfa, do it as a company car” have stuck

with me, even if their original speaker hasn’t (was that Jezza too?). But anyway, you have to have a company car for that plan to work out.

We all remember how we felt at key moments in our lives don’t we; the birth of your children, the day you got married, the day you told your Dad that you wanted to buy an Alfa. (Just me on the last one? Ok…)

My Dad has always been my go-to man when it comes to cars. After-all he’s my petrolhead inspiration; the person I followed into motorsport, the person I spent hours with in the garage tinkering with various project cars, the person I always speak to first if I’m thinking of changing my car. However, it seemed, at that moment he didn’t share my enthusiasm to open this next chapter in my motoring story.

He wasn’t impressed. He was also unconvinced with my rationale for going Italian; my wife was far more understanding, given our need for an extra two doors and bigger boot. My Dad’s raised eyebrow, though was justified. In actual fact I had plumped for a 159 saloon, so in theory I only really gained one extra door, and the boot is probably comparable with the Fiesta one it replaced, but with less loading area. (Whoops!)

Now, here is the bit you probably scanned down for before reading any words. What have I had to replace? Well the pre-Alfa me (I think of myself as a changed person now) would have expected a big list here, as I’m sure you do. I’m sorry to disappoint; only the O/S driveshaft and a glow plug have warranted spanner contact. And when you consider

Who made a better job of decorating that GM chassis?

that the engine came from a Vauxhall, you can hardly blame Alfa Romeo for the latter.

It does have the odd quirk. For example the engine management light comes on from time to time (read down to see what I think about that!), and resets itself when it realises that there isn’t a problem. It’s a common problem with 159s apparently – the car’s way of telling you that the battery has dropped a little voltage…or that’s what a real-life Italian Alfa man told me when I called the manufacturer. And it doesn’t have a single cup holder, though it has an integrated cooled drinks compartment that doesn’t even fit a carton of Ribena.

Performance-wise, the car is superb. One of the most fun ‘sensible’ driving cars I have owned was a 2008 Astra SRI 150 Sport Hatch, so when you consider that the 159 JTDM shares the same 1.9 engine as the Astra, it’s no surprise that the oily bits do their job well. The fact that the car is built on a GM platform is a bit like a fly falling asleep on the screen while you’re watching a brilliant movie, but in practice it just means you’re a little less reliant upon Italian design. It’s planted, comes with Brembo brakes as standard being the Lux, and is refined…ish.

The Alfa is comfortable, and the dashboard is simply stunning, which is good as I probably spend more of my life looking at that than I do looking at my wife. And the exterior of the 159 makes any other saloon this side of a Rover P5 look dull. I can’t help but glance back one, twice, even three times as I walk away after parking up. (I once fell in a bush admiring the car’s looks…)

But the best bit of all is the ownership experience. Driving an Alfa Romeo genuinely makes you feel like a hundred times the petrolhead you once were. You feel like a changed man, you walk differently (depending on what type of bush it was), and you believe that the world sees you differently. It doesn’t of course.

The shape of Alfas to come?

Telling someone you drive an Alfa Romeo never fails to raise a nod of approval though, even if it is sometimes accompanied by a raised eyebrow. Turning up in an Alfa Romeo ensures you look like you know your cars, and that you’re so confident with your choice of lifestyle, you don’t mind if it’s spent at the side of the road from time to time.

Not many marques this side of something exotic offer the character, the passion and the pub conversation that you get with an Alfa. And with the new models rumoured to be ditching GM for Maserati underpinnings, that looks set to continue. And the reviews were right; Alfa really have upped the build quality and reliability, in equal measure.

So I can’t fault the Alfa, not really. I’m smitten (and, most importantly so is my Dad!) and quite honestly I can’t see myself going back to a ‘normal’ car any time soon. It’s sensible, yet ridiculous. Beautiful yet simple. Powerful yet disarming. If you haven’t tried an Alfa yet, you owe it to yourself to do so, quickly.

I might even try one with a proper engine next… 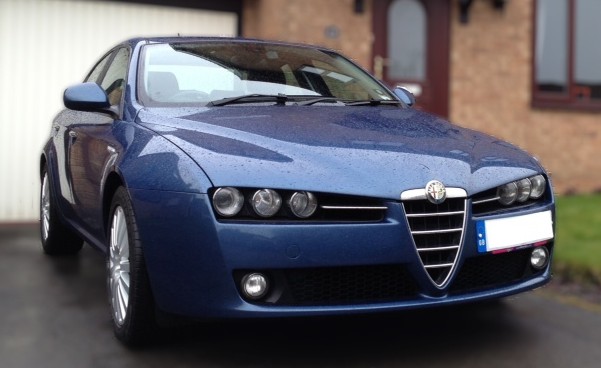 Alfa Romeo: Why wouldn’t you?