Home › Uncategorized › Road to the WRC

Road to the WRC

Posted on November 16, 2014 by paulwoodfordmedia

November 2014 saw the realisation of a career ambition for Paul, as he made his debut in the World Rally Championship. Though, as he explains, it wasn’t quite as he’d always imagined it.

As a young boy, brought up on a diet of rally cars and rally programmes on the TV, and stood by the side of stages watching the stars do their thing, I decided I wanted to one day be a part of the action. One day I’d be in the WRC.

At that age of course you have the confidence that whatever you want to do will come true. Or perhaps that was just my own level of ambition. Well I’ll admit I expected my WRC debut to be in a rally car, flying through the best stages in the world to the roar of adoring fans. (That still happens in my head by the way!)

What happened this weekend was very different, but as those who know me will tell you, it has been my ambition to present the WRC on the big screen for as long as I can remember. (Or as long as I realised Malcolm wouldn’t sign me to drive for Ford?)

The screens don’t come much bigger than the ones I appeared on at the final round of the 2014 World Rally Championship either. To arrive at the Sweet Lamb stage and hear my voice echoing round the bowl as they played repeats of the earlier live action in Newtown was an experience that will live with me for a long time. Or until the next time hopefully.

I was part of a line-up of people I consider to be very big, and very respected in the sport, and in motorsport broadcasting. Indeed, Russell Brookes’ former co-driver and leading figure in British rallying Mike Broad spoke to me later in the day to say I’d done a good job, and to suggest next time I be a bit more forceful when fighting for the big interviews with the rest of the world’s media. Great feedback – and I hope the ‘next time’ bit works out.

To work alongside, and be known to people I’ve long considered to be my rally heroes is an incredible feeling, and if you’re reading this as a budding motorsport journalist, wondering whether all the hard work is worth it, let me tell you – it is. Incidentally I’m working alongside Mike again next month when I host the BTRDA Rally Championship awards evening, and I’m looking forward to that.

Anyway, back to my weekend exploits, and the excitement of the WRC. Having done a test of the sound and equipment with the satellite van and technical team I’d be working with, I had a bit of time to kill so enjoyed the atmosphere in Newtown, where the crowds were building in anticipation of the arrival of the world’s best rally drivers. I enjoyed meeting people I knew, and being introduced to new ones who watch the rally programmes we’ve produced at Special Stage.

Producer Wayne was actually instrumental in getting me in front of the Wales Rally GB team, so it was good to have him there on the day to share the excitement and exposure. My Dad – a big part of my inspiration – was also along for the ‘ride’ and it was great to be able to introduce him to Ari Vatanen, his all-time rally hero.

I wasn’t, though prepared for the explosion that would occur when the cars arrived at the regroup point. The spectacle of the four or five-deep crowd behind the railings was heightened by the crowd of media and team personnel that gathered in the media zone area. I sometimes have to work alongside two or three other media outlets trying to get interviews, but there were perhaps dozens of microphones, cameras, recorders and note pads being hurled in front of every driver as they opened their doors.

With our stint being filmed live and broadcast to thousands of rally fans across the service parks and stages of the WRC, the pressure was on. I had to call on every bit of experience, knowledge and technique from my Special Stage duties in order to deliver content the fans wanted to see. We only had one chance to get it right.

With the team in the studio feeding me information and timings in my ear, my camera operator helping me pick a route through the scrum and Producer Wayne on stand-by with information on the event, who was arriving when and who was available to interview, it was a busy, demanding couple of hours. But it was an experience that I’ll never forget.

I hope to see you all at future WRC rounds, but in the meantime I’ll continue to pile in the work bringing you action from one of the world’s best motorsport TV shows, Special Stage. This weekend, I felt my motorsport journalism career took another step forward, and whatever happens next, I’m firmly standing where I want to be; at the heart of the best sport in the world. 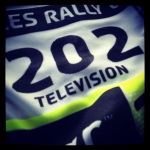 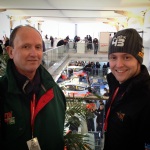 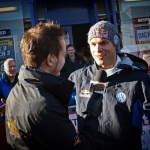